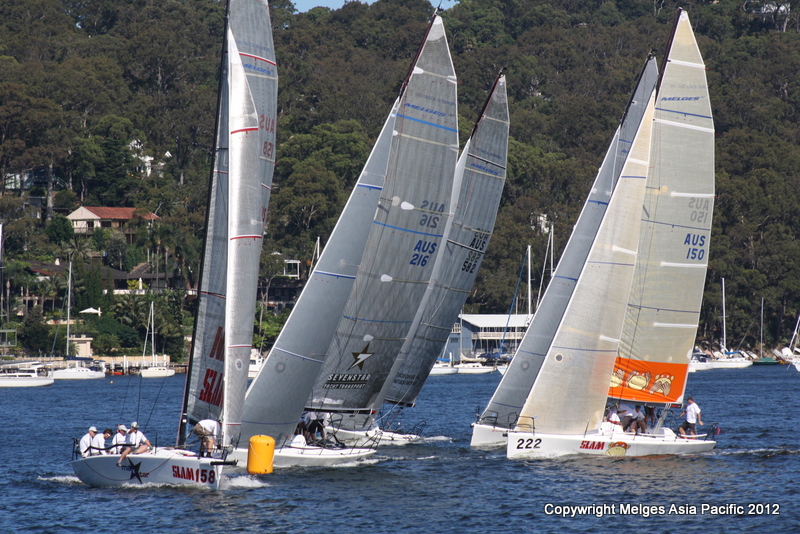 Melges 32’s prepare
for the Australian Championships this weekend.

The hardstand at Royal Prince Alfred Yacht Club is a buzz
with Melges 32’s arriving and preparing for the Australian Championships this weekend. The M32 regatta is supported by SLAM advanced technology sportswear, North Sails, Harken and the team at Melges Asia Pacific.

A series of ten races are scheduled, two in Pittwater and
the remainder off Palm Beach and a Southerly change forecast for Saturday should keep things interesting. Competitors have also been invited to join the Thursday night twilight race, which is a great social way to kick start the regatta.

Many of the teams took advantage of last weekend’s Sydney
Harbour Regatta to tune their boats, test their speed, crew work and tactics against the other M32’s. Greg Prescott’s
crew 2 Unlimited from Tasmania (chartered by Martin Hill) were extremely pleased with a regatta win considering it was their first hit out against other 32’s. Keen to taste an Australian Championship is Angus Reid and his crew on Maxstar from Canberra Sailing Club.

You have personally been very active in racing and promoting the Melges 32’s in Australia and a large part of their growth, what is it about the boat that appeals to you?

The Racing first and foremost is unbelievably close and tactical, yet you get some of the best downhill rides around as part of that close racing which most tactical classes don’t offer. The ease of getting the boat to and from major regatta’s on the trailer means you don’t end up spending valuable time and money on deliveries. The Melges 32 is one of the most responsive and fun sailing boats and I remember being told by my American M32 friends that “your worst day
racing is still one of the best day’s sailing you can have” I agree totally
with them this boat is just plain “addictive”.

How do you see the class evolving in the future?

We have some great people in the class who are committed to getting the best racing they can, as often as they can. There are boats all over the East Coast now and there are a lot of interested people on the sidelines that are ready to commit to an affordable world -wide class like the M32. The international class association is one of the best run and organised associations and has been incredible support to us so far. We are in discussion at the moment for world championships in Australia in the next couple of years and with the ease of
transport for the M32 it will be well attended by our European and US members.

What have been your strategy / preparation heading into the Nationals, What are your expectations?

I like to make sure the boat is prepared to a point where our only excuse is whether we sail well on the day or not. Although the M32 does attract a lot of professional sailors there is a strong commitment by the association to Corinthian crews, such as ourselves, and this means that everybody feels comfortable in the class. Only owner drivers are encouraged and that means a lot to an amateur crew. We all work together as a crew both on and off the water to make sure our boat is regatta ready.

These Nationals will be wide open and anyone could win. My main aim is to see the racing results strengthen the appeal of the class and to encourage more sport boat, one design and skiff sailors to see the M32 as a logical step forward in their sailing careers.

It’s a quality field and we are expecting some really
exciting tight one design racing over the weekend.

Two late Friday afternoon races kicked off the 2012 Melges
32 Australian Championships on Pittwater.
The quality fleet of Melges 32’s had no time for a breather during the high intensity races set by race officer Steve Merrington RPAYC.

The shifty breeze and extremely close racing meant competitors were never really out of the race and were constantly trying to peg off the next boat or maintain their advantage, tacticians were working hard with their heads out of the boat.

Queenslander Noel Leigh-Smith Desperado from Southport Yacht Club with experienced Pittwater locals Chris Links from Melges Asia Pacific and Jamie McPhail in the crew played the tactics card well to win race one. The majority of the crew hadn’t raced the boat since Hamilton Island last year. Chris commented “ We were rusty to start with and scrambled all day to stay in the mix but in the first race we got a nice shift out of the bottom mark and the right paid off, then
sailed conservatively down the run to win the race” Desperado finished in third place in the second race and received the SLAM Boat of the Day prize for first overall.

Greg Prescott 2 Unlimited Sevenstar from the Royal Yacht Club of Tasmania enjoyed the close racing and brilliant conditions that kept them thinking “We thought the Derwent was shifty until we sailed Pittwater” said Prescott who claimed a convincing win sailing away from the fleet in the second race and second place overall
heading into day two .

Stepping off his Farr 40 into a Melges 32 for the Championships was Chris Way The Business RPAYC looking fast downwind. The crew on The Business looked polished, local Steve McConaghy calling the shots, they led at times and were constantly pressuring the other competitors finishing the day on equal points with 2 Unlimited Sevenstar but in third place overall.

Angus Reid Maxstar from Canberra Yacht Club commented “We are used to sailing on the flat water on the lake, but local knowledge was a factor today in the shifty breeze. I was pleased with our speed and height but give us strong breeze tomorrow please.”
A predicted 20 knot southerly front tomorrow morning could be just what the doctor ordered for Maxstar.

Thanks to the sailing partners North Sails, SLAM and Harken
for supporting the event.

PRO Steve Merrington from the RPAYC managed to shoot off
three windward/ leeward races in around twenty knots of wind after lunch on Pittwater.

Racing was super close again and wind stronger down the
shorelines, making it hard for the leaders to defend their position, it kept the racing wide open as the southerly wind phased left and right as it came off the land.

Chris Way helming The Business with local tactician Steve Mc Conaghy have the most consistent results, four thirds and a second. The
first time Melges 32 skipper said he enjoyed sailing his Farr Forty doing
twelve knots but hitting sixteen and seventeen knots takes it to a new
dimension. Chris describes his experience today as “awesome sailing with great rides, long nose was going off!” and when commenting on boat speed Chris said “ we are sailing with old gear and we’re still going quick, sailing cats in the Formula 18’s has helped with chasing the pressure.”

Race three and series leader Desperado led around the top mark but by the bottom mark Geoff Masters Funnel Web sailed the shoreline
shift and came from third to win the race followed over the line by a pack of about five boats and a nail biter finish.

Race four and the majority of the fleet hit long nose, Breezin lost places following their decision to go to the right on the run and Desperado struggled with jib problems upwind. Gus Reid Maxstar and
his tactician Matt Owen who is the CEO of Canberra Yacht Club are experts at picking the shifts from racing on Lake Burley Griffin. Gus ordered more wind today and they got it, Maxstar was in her element and looked very composed and focused around the course winning race four. Maxstar was always in the mix in race five and managed to take advantage of a gybing decision at the top mark to steal a win from Tasmanian Greg Prescott 2 Unlimited Sevenstar .

A presentation of prizes supplied by North Sails, Harken and
SLAM was held back at the yacht club to the Boat of the Day Maxstar who heads into the final days racing in first place, two points behind is 2 Unlimited Sevenstar on equal points with The Business.

Plenty at stake tomorrow with four offshore races planned,
challenging the leading lake sailors and providing a spread in the fleet.

Tough day at the office for the final day of racing off Palm
Beach in the Melges 32 Australian Championships hosted by the Royal Prince Alfred Yacht Club and supported by SLAM, North Sails, Harken and Melges Asia Pacific.

Winds of 25 plus knots, averaging 18-22 from the South, South West and a confused seaway provided conditions for plenty of thrills and
spills and exciting rides for the final three races.

Noel Leigh –Smith Desperado AUS 582 won the regatta after a downwind incident with Angus Reid Maxstar AUS 158 was settled in the protest room. Maxstar from Canberra Yacht Club was blown out of race eight and had to carry a fourth moving them back into third place overall on equal points with Tasmanian Greg Prescott 2 Unlimited Sevenstar AUS 216 taking second place in the regatta on a count back.

Geoff Masters Funnel Web and his crew had an awesome day
racing in the swell “it shows how truly exciting these boats are, the courses were a little longer but you just eat it up downwind” said Geoff. The trimmer on Funnel web Stuart Mc Cuaig blew up two blocks and a winch handle and still managed to carry the big kite doing nineteen knots of boat speed.

Jamie McPhail tactician aboard winning yacht Desperado said
“we had a nice speed edge over the other boats to windward, the right was favoured and we made the best use of it. We blew out a shoot on the first run of the last race though.” Noel Leigh-Smith from Southport Yacht Club commented that “it was a great day of offshore racing, I enjoyed it much more than Ithought I would.” Noel sailed with his crew Jaime McPhail, Chris Links, Jabin Crisp, Grant Meredith, Josh Torpy and his son Ben.

The team on Breezin thought they did a handstand today when
they put the brakes on downwind and spectators could see daylight between the rudder and keel. The Newcastle boys said
it was like going down a mine shaft, and they should know, half of them work in them. The crew on Breezin will take full advantage of a day’s coaching they won as a prize offered by International Professional yachtsmen Darren “Twirler” Jones. Twirler has experience in the
Melges classes overseas and is keen to see its growth and development in Australia.

With professionals like Twirler, Steve McConaghy (The
Business) and Chris Links more involved in the class and Australian sailing coach Mike Fletcher who has been working
with the Funnel Web crew the standard of the entire fleet will grow.

Overall all competitors had three days of quality one design
racing in varied conditions. Thanks to race officer Steve Merrington and all his team for a great regatta.