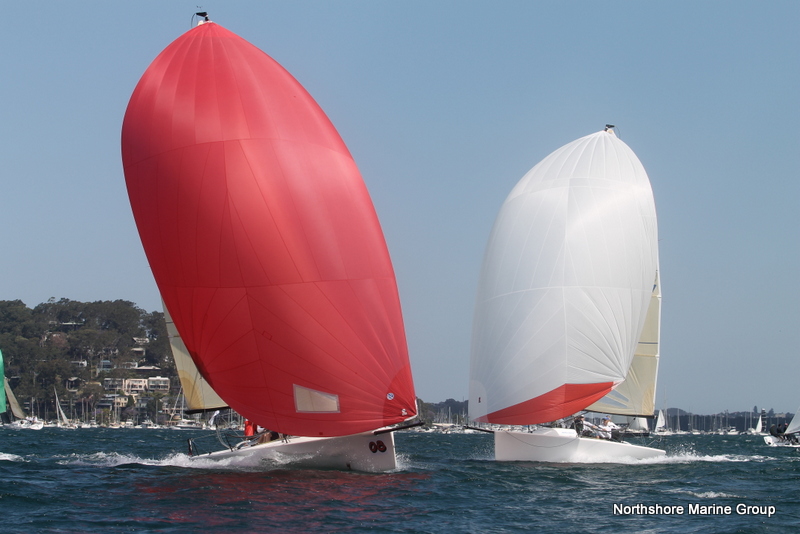 Principal Race Officer Steve Merrington had his work cut out at the Melges East Coast Championships over the weekend.  Merrington’s perseverance and patience provided a spectacular six races series in testing conditions.  In race one the wind swung through all points of the compass. The fleet started the race only to be recalled after a 180 degree swing.

Taking out the title of 2013 Melges 24 East Coast Champions was Lake Macquarie Yacht Club sailor David Young No Comment AUS 746. David’s crew included Brett Davis, Jim Kerrison and Nathan and Shona Wilmot. David loves the one design aspect of the racing and recently purchased No Comment. “We had a great regatta, we’re happy to be involved in the Melges 24 class, they are a nice bunch of crews” said David. “The Wilmots helped us change gears which is where we had been struggling and the racing was close” Commented David.

The Wilmots are accustomed to travelling the world competing in Melges regattas so a regatta two minutes from home was a refreshing change. Nathan and Shona Wilmot came fifth on Irish boat Embarr IRL 829 in the Melges 24 Worlds in San Francisco following the Americas Cup; they have supported the growth of the class in Australia by sharing their knowledge and experience with all crews.

The sailing world is small; Heath Walters Northshore Marine youth crew included his fifteen year old son Harley, Bonnie Nixon fresh from her 2013 Melges 24 Worlds Campaign in San Francisco, Graham Fraser from Sri Lanka and Dutch Melges 24 sailor Irena Doets. This Motley crew finished the regatta equal second, third on a count back to Jester 4.  The East Coast Champs was the first regatta since competing at the Melges 24 Worlds in San Francisco for the Jester 4 team, their improvement from international competition was evident.

Geoff Fogerty’s Amigos were on the pace and had several highlights but struggled to hold on where it counts at the finish line.  Crew member Harry Bethwaite was treated to the admired Kendall Catering on Amigos.  Lunch between racing includes freshly made gourmet baguettes, fruit and chocolates washed down with an ice cold Peroni, other crews are usually circling their boat wishing they had the same.

Pittwater was busy with club racing on Saturday afternoon,  crews lined up on the rails like stadium spectators watching the awesome racing and large spinnakers of the Melges 32 fleet planning downwind in twenty plus knots of wind weaving through the course.

At the first rounding of the top mark in each race the Melges 32 fleet were incredibly close, gains were made downwind staying in pressure and looking for the next shift.  The series was tight, all boat achieving places in the top three at some stage.

The Tasmanian boat 2 Unlimited AUS 216 skippered by Greg Prescott needed to work hard for their win at the East Coast Championships.  The crew were able to defend their title for a second year fighting off the other Melges 32’s under the experienced instruction of tactician Darren Jones.  The 2 Unlimited crew are enjoying their winning streak but can feel pressure of the fleet bearing down.

Chris Way East Tiger III AUS 221 finished the regatta in second place, and commented “We’re getting closer” when asked about his crews performance in relation to 2 Unlimited.  Easy Tiger finished two points behind 2 Unlimited, their worst result a third place.

Martin Cross If AUS 582 is a regular club racer at the RPAYC and took advantage of his local knowledge of the Towlers Bay race course to challenge the leaders, placing third overall.  Pittwater challenges the best sailors and mistakes were paid for in the tight one design racing.

The win for both visiting teams to the regatta who made the effort to travel paid off. Melges crews will head up Lake Macquarie Yacht Club for the Melges NSW State Titles in a fortnight’s time; Adelaide Sailing Club is running regatta one of their Melges 24 series next weekend.